Manuel de Jesus Isasi Hernandez is a new father and a lifelong artist who is originally from Honduras. He is seeking asylum in the United States but his future is uncertain. Ravleen Kaur reports.

Creativity helps an asylum seeker, artist, and father build a life in America

Editor’s note: The interview with Isasi was translated from Spanish by Passport to Languages and Next Generation Radio staff.

From Honduras to the United States, Manuel de Jesus Isasi Hernandez has always created meaning from the materials at hand.

As a 12-year-old in Honduras, he started building and selling furniture to help support his mother.  After he fled Honduras to escape violence, art followed him to Mexico, where he lived for two years, painted murals and took tattoo classes.

In 2018, Isasi crossed the U.S.-Mexico border seeking asylum and landed in immigration detention. There, he created handmade rosaries created out of plastic bags as gifts for fellow migrants.

Now, the 25-year-old is waiting to find out if he will be granted asylum and a permanent home in the United States.

“I would want to live here forever,” said Isasi. “It wouldn’t be the same somewhere else.”

In 2018, Isasi and hundreds of other migrants were bussed to the Sheridan Federal Correctional Facility in Yamhill County, Oregon, because of overcrowding at detention centers close to the border.

After six months in detention, Isasi had nowhere to go and no relatives or contacts in the United States who were willing to sponsor him. Without a sponsor, Isasi could not leave the detention facility. 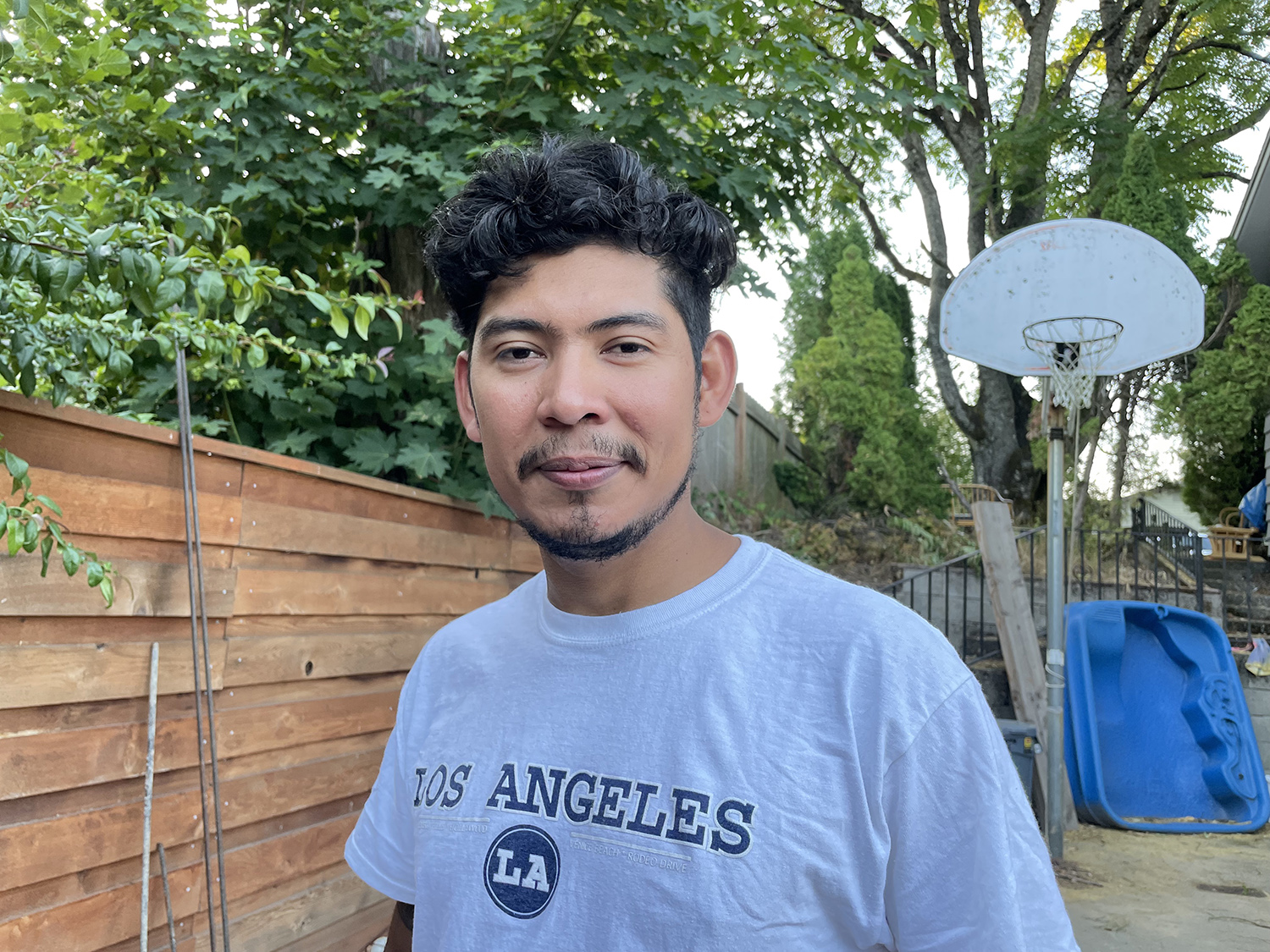 Originally from Honduras, 25-year-old Manuel de Jesus Isasi Hernandez, center, migrated to the United States to seek asylum. He lives in Portland, works in construction and awaits a final decision on his immigration case. (Photo by Ravleen Kaur)

Lawyers, immigrant advocates and faith-based organizations spent months at the Sheridan facility working to provide services and solidarity to detained migrants. They rallied to raise the funds needed to pay Isasi’s $5,000 bond so he could be released from ICE detention while awaiting further immigration proceedings.

Paloma Norris-York, one of the lawyers who had been volunteering with a project providing counsel to detainees at Sheridan, told other lawyers that her family would be willing to sponsor and shelter migrants in need.

“And I will just never forget … driving to Sheridan, him coming out and coming home,” said Paloma. “We hit it off immediately.”

After six months in detention, Isasi was released and moved in with Paloma and her family on a quiet, tree-lined street in Southwest Portland while he waited to learn if a judge would grant him asylum.

It was the forging of a new family. Paloma began taking Spanish lessons while Isasi learned English, took art lessons, and volunteered with Habitat for Humanity.  Last year, he helped construct an extension to Paloma’s house where he lives with his daughter.

When he video calls his mother in Honduras, he tells her how lucky he’s been.

“I tell her … everything has been really good. I came to a house with a family that has adopted me,” Isasi said. 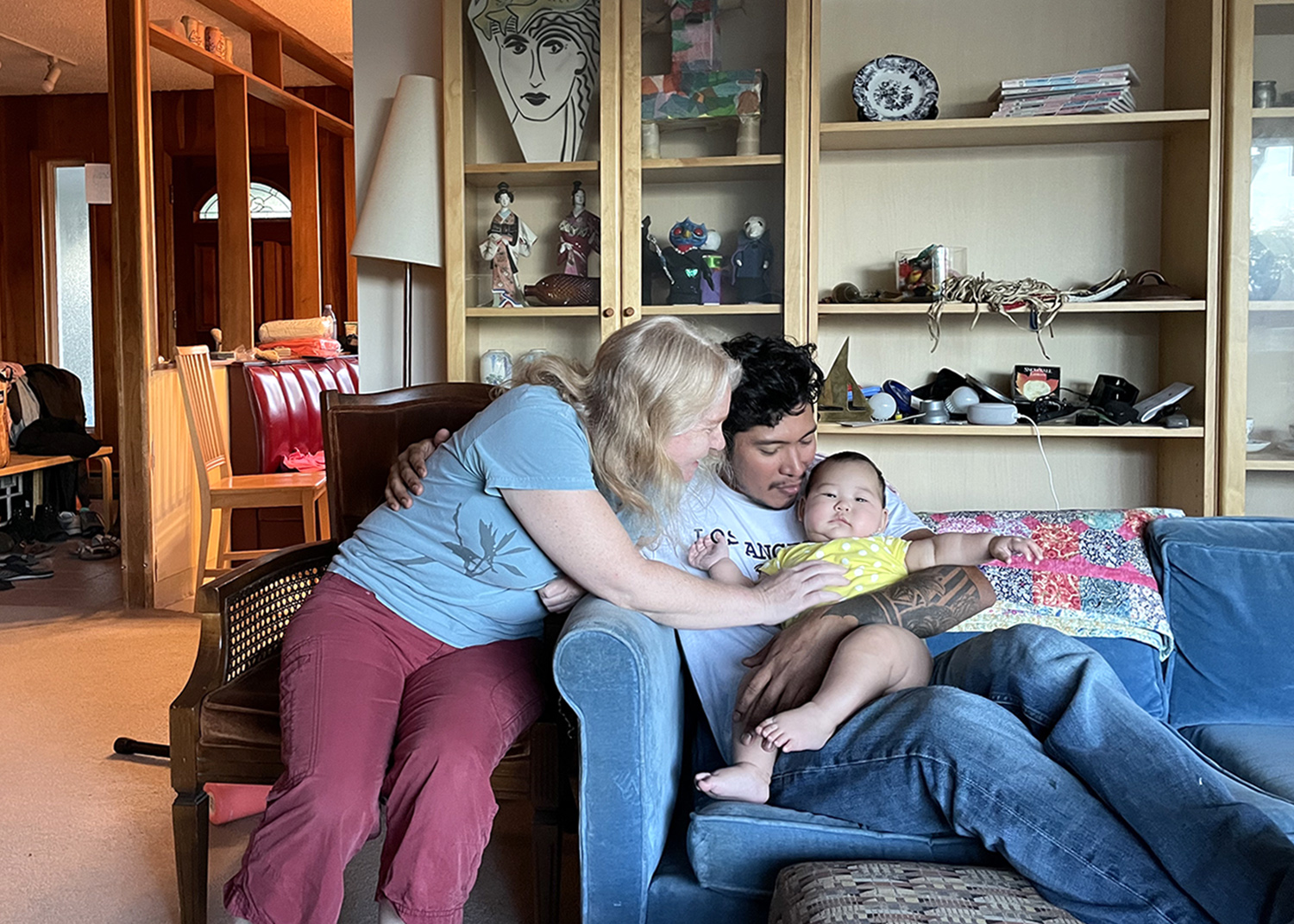 Attorney Paloma Norris-York, left, sponsored Isasi so he could be released on bond from immigration detention. For the past three years, Isasi has continued to live with Paloma and her family. In that time, he became a father to a daughter, Alishai, who is now six months old. (Photo by Ravleen Kaur)

These days, he works Monday through Friday in construction, sometimes picking up extra shifts at a restaurant.

“It’s important to do a good job … a person’s future depends on one’s work,” said Isasi.

But Isasi is building a life he doesn’t know he’ll get to inhabit for long.

With the birth of Alishai, the stakes for staying in the United States are higher than ever. His work permit keeps him eligible for employment, but it expires next year.

In 2019, a judge denied his asylum case. With the help of a volunteer attorney, Isasi filed an appeal that could take years to process. If the appeal is also denied, Isasi could be deported to Honduras.

But because asylum policies have shifted during the Biden administration, Paloma believes it is “very possible” that Isasi’s appeal could be granted.

“And so we do have hope,” said Paloma. “But it is years of him living with the unknown.”

As Isasi contends with that unknown, he finds strength in art, whether it’s using his body as a canvas for tattoos he inks himself, transforming wire from a construction site into the sculpture of an animal, or creating a signature that incorporates symbols for all his loved ones.

“Art helps me stay motivated in life,” said Isasi. “It makes me feel creative and gives me hope and strength to keep going.”